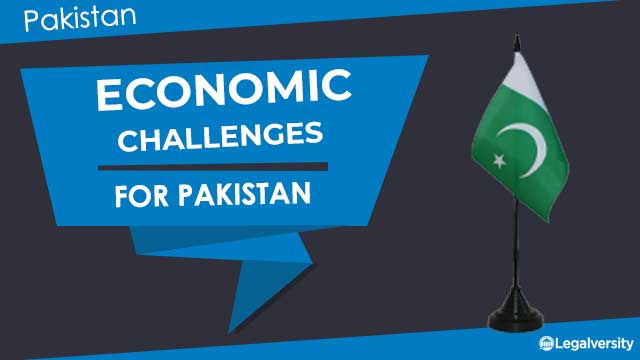 Pakistan is currently facing a dire situation in its economy. This is happening due to so many challenges. In this article, we try to compose some of the challenges that Pakistan is facing in achieving its economic development growth. Below there are a few major challenges in Achieving Economic Development in Pakistan.

One of the mainstays of any country around the world for economic development is its existing reserves of natural resources and assets base. Pakistan has plenty of natural resources such as large reserves of oil and gas, a great quantity of copper and ore deposits, in addition, huge coal and salt pits, and gemstones. Likewise, it possesses sound manufacturing industries of textiles and clothing, steel fabricating, cotton ginning factories, sugarcane mills, sports goods, leather manufacturing, etc.

The current account deficit of Pakistan is expected to widen by 2.4 percent of Gross Domestic Product (GDP) by 2018-19 (FY19), largely on the back of declining exports and widening trade deficit, said the World Bank (WB). The WB in its latest report, South Asia Economic Focus, predicted that the current account deficit is expected to widen from 1.2 percent of GDP in FY2016 to 2.2 percent in FY2017 and 2.4 percent by FY2019. ‘The key contributor to this will be a widening of the trade deficit due to moderate growth in exports due to weakening of exports competitiveness and global demand and higher growth in imports due to increased economic activity.

Apart from these mineral resources and industries, Pakistan also has vast tracts of agricultural land. Out of the total geographical area, about 27 percent is cultivated, and of this, 80 percent is irrigated. Pakistan has one of the most developed irrigation systems in the world, i.e. Indus Basin Irrigation System. We have rivers and the sea. We have harbors to export and import goods. We are blessed with four seasons and fit tropical weather in terms of farming and agriculture.

There is no doubt that Pakistan is a resource-rich country and possesses mineral fuels, manufactured goods, beverages, and tobacco (13%). Moreover, the other resources include food and live animals (11%), crude materials (11%), chemicals (11%), machinery (8%), and miscellaneous articles (8%). In addition, we have 175 billion tons of coal reserves. It is up to 618 billion barrels of crude oil. The natural gas reserves are also in abundance, it’s about 885.3 billion cubic meters.

The constant leading power cut-off challenge has troubled the economy. Since the year 2000, this curse has wreaked havoc on the overall economy.

Terrorism is a huge stumbling block for economic generation in Pakistan. Since 2002 we are a war-torn country. The State Bank of Pakistan report (2016) says that the war on terrorism has cost $118 billion. According to Global Terrorism Index (2016), out of 163 countries, Pakistan stands 4th worst hit. This has long been a reason for Pakistan’s negative international image which has limited foreign investment in the country.

In Pakistan wealth is concentered among a few rich families. The rest of the population is dependent on them. Due to wealth concentration, around 35 percent of people spend their lives under the poverty line. According to Multidimensional Poverty Index (2016), 39 percent population of Pakistan lives in poverty, which means that 4 out of 10 people in Pakistan live in poverty.

Since 1947, the ongoing corruption has steadily planted its roots. In current circumstances, it has become a highly political debate as even the prime ministers of the country are accused of it. Corruption has proven to be a menace for institutions.

Pakistan scored 32 points out of 100 on the 2016 Corruption Perceptions Index reported by Transparency International. The corruption Index in Pakistan averaged 24.37 Points from 1995 until 2016, reaching an all-time high of 32 Points in 2016 and a record low of 10 Points in 1996. In the 2022 transparency report, Pakistan stands at the 140 mark under the 180 country list. Yes, there is some doubt on this transparency report, as the data collected for this report is based on only 400 people from each province of Pakistan. Which is clearly doubtful among a huge population as far as 2022 is concerned.

Education is a key component of economic progress. Unfortunately, our current literacy is 60 percent, at least in South Asian countries. About 25 million children are out of school. More importantly, on the grass-root level, thousands of schools are lacking very basic facilities such as sanitation, water, electricity, boundary walls, etc.

The public hospitals depict bleak pictures where we find a lack of proper medicines, beds, equipment, etc. Due to the absence of basic health facilities, 170 women die from pregnancy for every 100,000 births. For every 1,000 babies born, 66 die before their first birthday. In addition, approximately 44 percent of children in Pakistan are stunted. More than 3500 children have lost their lives in three months due to insufficient medical facilities in various Khyber Pakhtunkhwa (KP) hospitals. According to a report obtained by Roznama Dunya, on 15 July 2017, 40 minors had died on daily basis at government hospitals from January to March whereas 1800 children were born with a weight of less than 2.5 kg. The report also revealed that 150 women died during deliveries in government hospitals whereas 45,640 children came into the world in these three months. 1457 infants fell prey to different diseases.

The regressive tax system collects about 90 percent of tax revenue from common men. Big corporations, landlords, businessmen, politicians do not pay their due share of taxes. They earn a lot but pay less tax; on the other hand, the poor earn less but are taxed more. Each year billion rupees are evaded through tax havens established in foreign counties. The incidences of tax evasion have hampered Pakistan’s economic progress.

Pakistan suffers from a number of crises but the crisis of good governance is on top because it is the core of all other problems. Our country is suffering from a weak institutional setup, political instability, rampant corruption, lack of accountability and transparency, and bad law and order situation.

What should be done to overcome the above challenges?

Government should improve relations with neighboring countries like India, Iran, and Afghanistan.

For economic information, communication, and technology sectors among others should be given more preference and the government should improve its system. Because in forthcoming years, all the economies will be measured through technologies. India earns lots of money through its IT industry. The employment zones for youth should be opened so that two-thirds of youth could contribute to the economy of Pakistan. They could use their potential and skills for a better Pakistan.

The alarming education system should be improved. The quality education from primary to university should be ensured. A proper school monitoring mechanism should be designed. A new and upgraded curriculum needs to be introduced. Instead of investing a lot of budget on the defense side, more budgets should be allocated for education.

Quality vocational training zones should be established in each district for youth as they could learn technical skills in different cadres and trades. Government should ensure those vocational zones that how they are operating and functioning. One of the primary ways of enhancing the economy is to support entrepreneurship and to create new avenues for growth by guiding the youth.

Before everything else, the government ought to overcome the lingering energy crisis. Pakistan should enhance export competitiveness by reducing the cost of doing business. Pakistan should adopt a strategic approach to increase its export in neighboring markets and underline the need of holding a single country. As a result of the overall economy dilemma, the common men and women in the country are facing economic deficiency and deprivation.