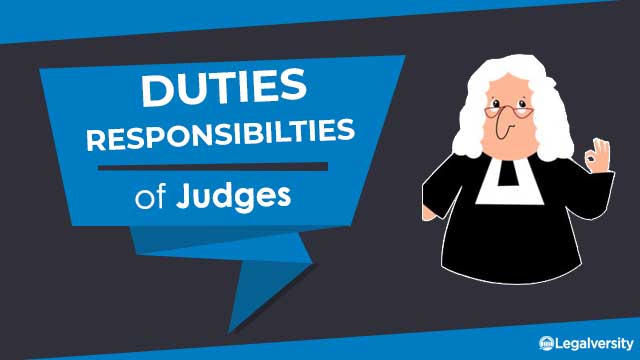 In this article, you will learn about the duties and responsibilities of the judges. Most people think that being a judge means passing judgments, much like one might do in the courtroom, but that’s not the case at all. Judges are responsible for the safe and fair operation of their courtrooms. They are also tasked with evaluating the qualifications of those who practice law within their jurisdiction, such as practicing attorneys and paralegals. For this reason, judges have important duties that extend beyond legal matters and help maintain the rule of law and order in their communities. Read on to learn more about what these officials really do all day!

Whether you’re applying for a seat on a municipal bench or an appointment to your state’s highest court, judges will expect to see some broad descriptions of your professional experience. But that doesn’t mean you can just describe your general duties as responsible for making decisions in legal cases. Judges want to know about specific challenges you’ve encountered and overcome, whether working as a public defender or district attorney, handling juvenile delinquency cases, or settling civil disputes. Whatever challenges you describe in your resume should relate directly to what’s expected of you in that judge’s courtroom.

The Importance of Impartiality

It’s easy to think that judges are just people in fancy clothes who decide cases—you only see them when they’re presiding over a court case. But their responsibility runs far deeper than simply hearing arguments from two sides, weighing facts, and issuing a ruling on whether or not to keep someone in jail. Judicial impartiality is important because it assures all parties involved that they will be treated fairly, while at the same time maintaining public trust in our justice system. A judge may have been a defense attorney earlier in his career, or she might have risen through a firm as an intern.

In order to be considered for an appointment, candidates must have an established record of excellence in their field. Most judges are appointed after they’ve spent many years working as practicing attorneys; others enter private practice or open up their own firms after serving a few years on a lower court. Before deciding whether to accept an appointment, it’s important to consider what your life will look like over the next several years. Since you won’t be able to take cases or client matters with you should you decide to leave your position, you may not want too much variation in your job responsibilities if you plan on leaving.

A judge’s job is to be independent, impartial, just, and fair. As a judge, you must decide each case on its own merits, using only legal authority derived from statutes (laws) passed by Congress or from constitutional provisions. As an independent branch of government, judges are not allowed to rule based on what they think would make the law better or how it might affect them personally. When deciding cases, you must never allow your personal beliefs about politics or political parties to influence your decisions. Although it’s difficult for most people to believe that judges are as objective as possible given their lifetime appointment with no way for voters to remove them once elected (except impeachment), Federal Courts have long stood behind judicial independence as one of their biggest strengths in providing justice when others cannot do so.

Answering a higher authority, judges are governed by judicial codes that outline both official conduct and behavior. While few states provide specific guidance on conduct unbecoming or how judges should respond to criticism, judges should never engage in political activities. Keep your personal beliefs out of court. That said, it is okay to talk about what you’ve done as a judge when campaigning for re-election or seeking another office (if you’re eligible). And remember that despite your best efforts, all judges make mistakes; acknowledge them, learn from them and move on.

How to Become a Judge

Judges are appointed to fill vacancies by a judicial authority, such as a governor or president. In addition to state-level judgeships, there are numerous national positions available in specialized courts, such as bankruptcy court or a tax court. If you would like to become a judge at any level, your best bet is to go through law school and then pass the bar exam for your state. Many people who go on to become judges began their careers practicing law before pursuing an advanced degree and specializing in a particular area. For example, someone might start out working as an assistant district attorney (ADA) before becoming an assistant federal prosecutor. Others may specialize in family law after serving clients in that area as attorneys in private practice.

To know about how to become a judge or lawyer, you can refer to this article in detail.