Q1. Pakistan has launched its first-ever National Security Policy 2022-26 with a particular emphasis on economic security. Discuss the salient feature of NSP and its prospects to achieve national security objectives for the country.

Q2. Pakistan has declared 2020 as the year of a Blue Economy. Discuss the potential challenges and likely prospects of this idea to improve the overall economic position of Pakistan.

Q3 Political and Economic instability arc the core issues of Pakistan since independence. As a policymaker, devise ways and means to achieve stability in these spheres with viable/practical steps.

Q4. The Indian revocation of Articles 370 and 35A in the Indian Occupied Kashmir is to ‘officially’ annex the area into its territory through ethnic cleansing, forceful conversion, and illegal settlements. Analyze the impact of these actions on the self-determination struggle of Kashmiris.

Q5 The regional rivalry and competition between Saudi Arabia and Iran are impacting Pakistan in the politico-economic realm. How Pakistan can maintain the balance in its relations with these Countries to safeguard its own national security interests?

Q6. The China-Pakistan Economic Corridor (CPEC) is termed a ‘Game Changer’ in regional trade/economic connectivity. Objectively analyze its pros and cons with arguments and examples.

Q7. How do you view the merger of FATA into the KPK: how far this merger would bring the area at par with the rest of the country in socioeconomic and political developments?

Q8. Discuss the role of Pakistan in the United Nations Peacekeeping Mission worldwide. How far Pakistan has been successful in achieving a positive reputation in these endeavors? 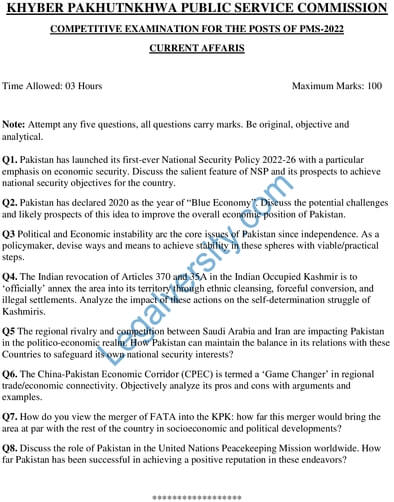