The following questions were given in the CSS Muslim Law and Jurisprudence Paper of 2021:

Q2. Explain the provisions of Section 4, Muslim Family Laws Ordinance 1961, about the right of inheritance for the orphaned grandchildren. Evaluate the arguments for and against this law from the perspective of repugnancy with Islamic injunctions.

Q3. Elaborate how the issue of the apostasy of Muslim women in British India prompted the Hanafi scholars to find solutions for the problems of married women in the Maliki school and how their efforts culminated in the form of dissolution of the Muslim marriage act, 1939. Also, explain the reasons for this act’s becoming almost redundant in Pakistan.

Q4. “For you, there is life in qisas” (Qur’an, 2:179). Elaborate the implications of this divine injunction in the light of the various theories of punishment, such as retribution, deterrence, reformation, and prevention.

Q5. Does Islamic law distinguish between the consequences of direct and indirect participation in hostilities? Also, explain what rules and principles of Islamic law are violated by suicide attacks.

Q6. How the classical Muslim jurists defined riba when unlike many contemporary scholars, they did not distinguish between the riba of the Qur’an and the riba of the Sunnah? Explain the implications of considering the riba mujmal (unelaborated) term of the Qur’an, which has been elaborated by the prophetic traditions.

Q7. Define Sunnah and explain the inseparable bond of the Sunnah with the Qur’an by highlighting in particular how the Sunnah elaborates the meaning of the Qur’an.

Q8. Write short notes on any TWO of the following:

You can download this CSS Muslim Law & Jurisprudence Paper of 2021. 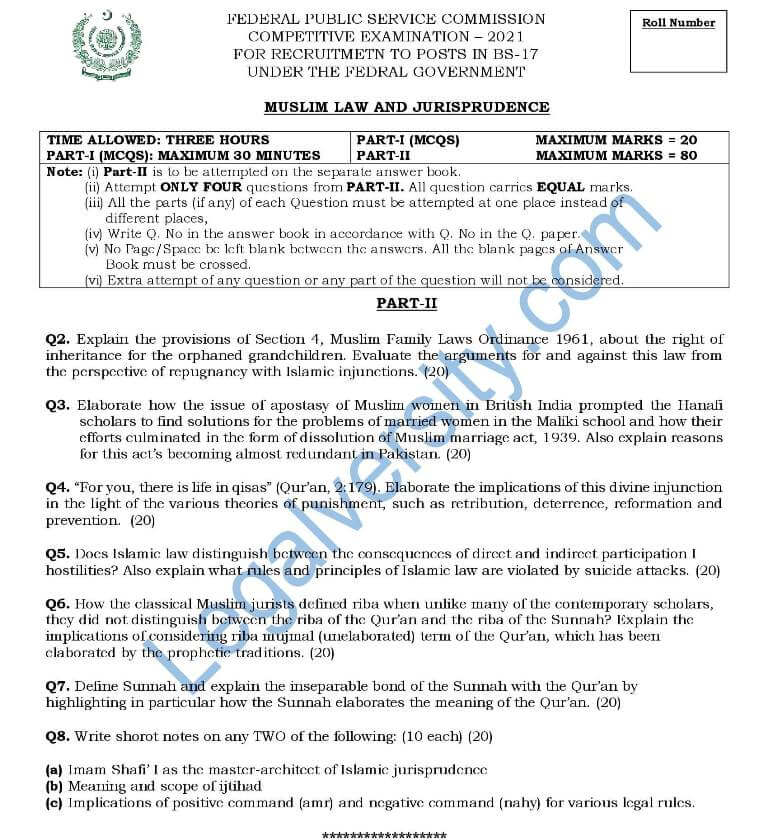